A Visit from my Sister (and family)! 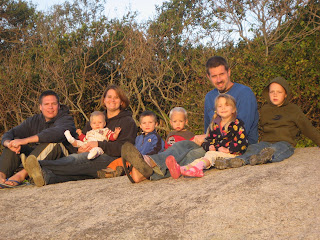 The past two weeks we have been enjoying time with my sister and her family. They arrived on Monday the 15th after MUCH DIFFICULTY!!! I will not take the time to share all the details.
Anyhow, we are so glad the God opened the doors and allowed them to come. 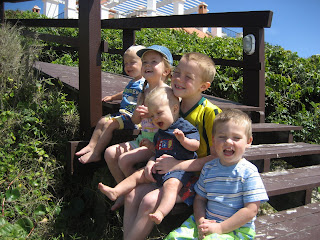 It was so special to get the 5 cousins in the family together for the first time. Needless to say, we had some crazy moments with a 7 year old, a 4 year old, a 2 year old, an almost 2 year old and an 8 month old. Lots of laughing and crying!!! 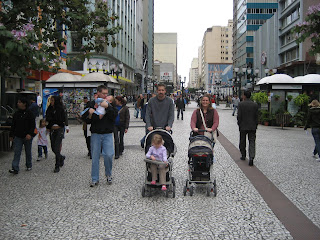 We took them to the Walking street in downtown Curitiba. It is a great place to really "feel" & "smell" Brazil. Unfortunately we ran into the same crazy man who walks around in his speedo swim wear. We couldn't believe the odds that my mom and my sister both saw him while they visited! 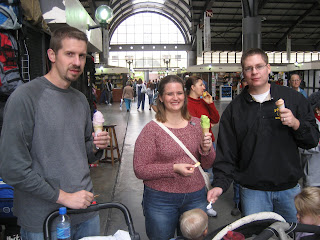 While here, they got to experiment with many unique foods. Such as Avocado ice cream (notice the bright green ice cream in Laura's hand!), drinking fresh coconut juice, pizza with eggs and onions, hamburgers with peas and corn. Arabic fast food, and best of all, CHURRASCO!!! 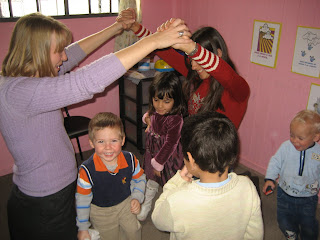 It was fun to have them visit our church. They felt so welcomed and wished they could have communicated better with our people. It was really fun for me to see Andrew interact with the other kids. He left speaking few Portuguese words, like Oi, (hi) and responding to commands! This picture is of him in our Sunday School class. They also joined us for our after church coffee in baby cups! 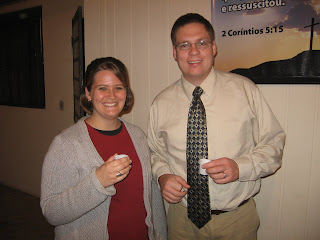 James and Mark were able to enjoy a few runs together, even a couple on the beach here! I think they both enjoyed having a partner, and running in unique settings. 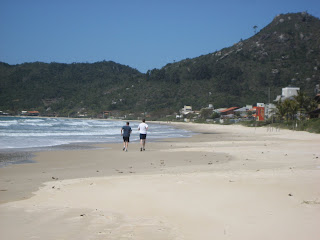 We are so thankful to have family that loves the Lord. Family that sharpens you when ever your together. We are already planning for their next visit in 2013!!! 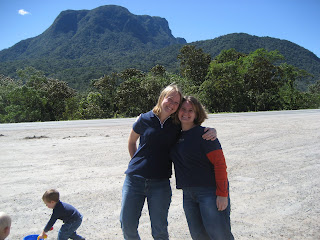 Posted by James and Christen at 9:27 PM 4 comments: 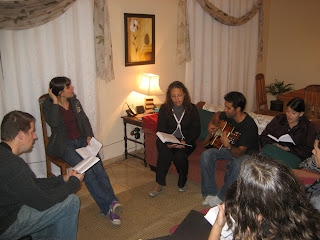 In January, James took over the leadership of the youth ministry. We meet on Saturday evenings. Normally they meet at the church at 6:30. We have a time of singing led by our youth, then James brings a Bible study. Right now we are in the midst of a study through Mark. Then we usually have a time of games; table games, volleyball or whatever else sounds fun.

Last Saturday, we had a special meeting at our house. We played volleyball in the dark and had typical brazilian style hot dogs*. 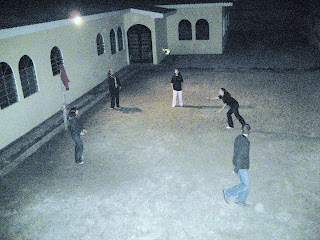 Last month we began an Olympic themed competition to help our group grow both spiritually and numerically. We are focusing each month on a major spiritual discipline, ie. devotions, prayer, witnessing, and more. 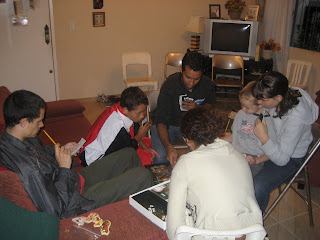 It seems that just as we began, satan started working even harder to pull our teens away. Most of you know about Jessica, who while being counseling for church discipline, decided she was not coming back to our church. Enrique is being pulled away by his unsaved family, and Andriel is being pulled away by work. Our other 5 teens are being pulled away by less obvious things. Please pray with us as we strive to equip them to live for God and fight through prayer for them to "Put on the full armor of God, that they may be able to STAND against the wiles of satan."

Here's what you do:

Saute some onion in a little oil. Add package of hot dogs cut into small circles. Add a can of tomato sauce or extract. Add a can of corn (including the juices). Add some oregano and salt to taste. The consistency of the sauce should be slightly runny so you may add more water. Serve on bread or hot dog bun. 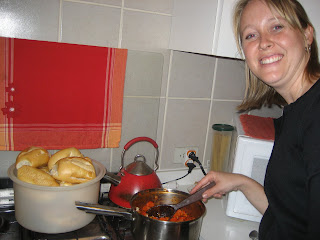 Oddities of Life in Brazil 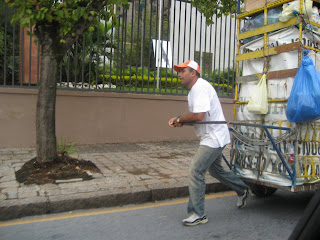 You never know what to expect in a day here.

#1 Last night during dinner, a beggar rang our doorbell. He asked for some food and James said, Sure, we we've got bread (we were eating grilled cheese), the man said, no, I've gotten lots of bread lately, I want some beans and rice. James told him we don't have any beans and rice. The man then asked for money.

People want you to give and help but only on their terms. It is amazing how often people turn down help because it isn't exactly what they wanted. 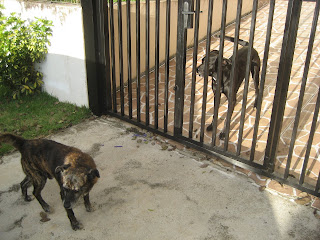 2. This morning when I got up, there was a strange dog in my front yard. He was very small and fit right in between the bars. I told him to leave and he didn't go. Finally I got out the water hose and sprayed him out. He crawled out into my garbage can and was too small to jump to the ground so I ended up having to pick him up anyway. (Please note that this entire time I am having to harden my heart to this cute little guy.) About 2 hours later my big black dog discovered that this little guy had snuck back into our yard and was hiding out behind a bush.

We let him stay in our yard all day but didn't give in to feeding him. (One of the other neighbors had put water out for him earlier.) James finally carried him down the street and around the corner in an attempt to get him to leave our street.

Why won't you keep him or at least feed him, you might ask? 1. We already have two dogs and that is plenty. 2. Just recently some of our neighbors adopted a street dog. They set up a make shift home and all took turn feeding him as well as vaccinating him BUT he still lived in the street. We began to have a horrible trash problem. Every day there was trash everywhere and along with the trash came much discord among the neighbors. SO, if we feed the dog he will stay and we just can't do that.

Now for the end of the story. Tonight as we got in the car for church, the little dog crawled out of our bushes and said hello. We all got in and as we pulled out we heard a yelp. He had not moved from under the car. As we pulled away I prayed with a heavy heart that he would have died and not just been injured. He was already starving to death and faced a horrible future of starvation or abuse or both.

This is new for me, having to harden my heart. There are just SO many street dogs that keeping one draws others. 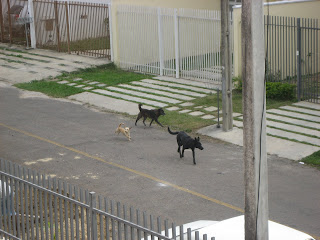 One more story. We had a street dog that we loved, Velho (old man) was what we called him. You might remember my past blogs on him. About 3 months ago Velho got a bunch of friends. Our one street dog grew into about 6 just on our little street. Some were not as friendly as velho and one often growled at Daniel when he played in the street. Anyhow, suddenly in one week 22 street dogs died. We have heard it was the city government controlling the population of strays. It is horribly sad and we lost Velho during this time. The above picture is our 2 dogs out playing with Velho.
Posted by James and Christen at 10:07 PM 3 comments:

A Note of Praise 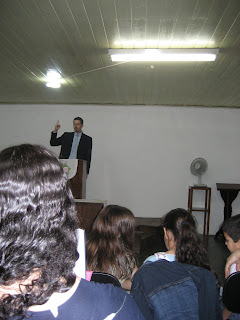 Every 5th Sunday of the month, we have a special service focused on praise. We invite everyone to participate through special music, quoting a verse or passage or giving a testimony of praise.

For me it is wonderful to see people singing praises to the Lord. None of us are professionals but the praise was genuine and I believe brought honor to the Lord! 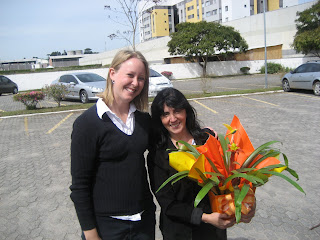 I had to throw in a couple of pictures from my last actual day of class. After class we went out to churrasco with Nilda. It was lots of fun. I bought her this beautiful bromelia, which she carried home on the bus. I wondered if it weren't a little to big, but I think it made it ok! I praise the Lord for all that he has taught me this year and for a WONDERFUL teacher and friend! 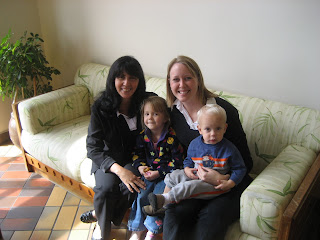 Nilda loves our kids and it is so fun to see them interact with her.
Another note of praise, is that Nilda has started to attend one of our sister churches on her side of town. We will continue meeting once a week to go through bible studies together and for her to conintue to help me as I learn more.

We praise the Lord that our friends, The FARLOWS, are getting so close to joining us here in Curitiba. Pray that their final bit of support will come in by next week.

"Let everything that has breath praise the LORD!"
Posted by James and Christen at 10:24 PM No comments: 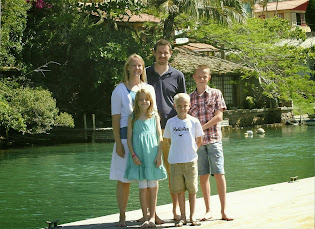 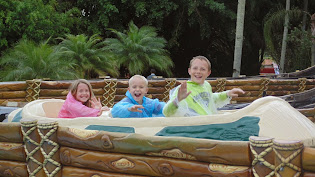 James and Christen
Florianopolis, Santa Catarina, Brazil
We are the Taylors. We have 3 children, Daniel, Hannah, Jeremiah and are missionaries in Brazil. Our hearts desire is to grow in our relationship with our heavenly Father, living zealously for Him. Sharing the precious hope of salvation with those who are blinded by the lies of this world.